I grew up with a typewriter in the house.  I had learnt to type before my family had its first computer...a TI99-4/A (which should tell you how long that has been).

I liked how the keys felt on a typewriter, how it took a lot of force to strike one.  Making a mistake was difficult because you had to put in a lot of effort to hit the key.  When the Apple II and later PCs came into vogue, they had much the same keyboards.  Even the early Macintoshes were that way.

Early computer keyboards weren't just hard to hit, they were hard to break.  They were heavy but well made, and not prone to breaking down or breaking, period.

Then somewhere along the way, some "genius" got the idiotic idea that membrane keyboards were better.  Newer keyboards required much less effort to hit keys and produce results.  That may be fine for those learning to type on such keyboards, but for those who grew up with typewriters, such keyboards are an annoyance.  Worse still, many keyboards contain an "Fn" function key, a "windows menu" key, and other extraneous keys.  Such keyboards are infuriating to use, and for a typewriter-trained typist, they lead to spelling mistakes that would never be made on an old keyboard. 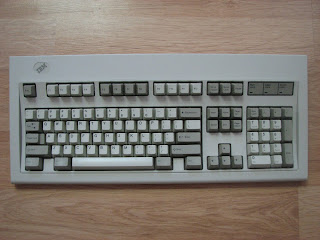 I recently learnt of a company that makes and sells AT-101 keyboards.  A 101 has only five keys on the base row, the two Control keys, two Alt keys and a large Spacebar.  I ordered one and had it shipped to me (not the one pictured above, but similar).

It has been a joy to use.  I love the high action of the keys, I love the sound, the firmness, the fact that these keys will not break and I will get years of use from it.  I love the larger keys, much easier to hit and requiring less hand movement.  I love the absence of unnecessary keys, not having to pry them off and throw them away every time I buy a cheap 104.  And I love the accuracy, the reduction of mistakes as I type.  Typing takes more effort, but the trade off is worth it.

Cheap 104 key keyboards are highly annoying.  They are wasteful because they are disposable, and they are prone to breaking without any great physical force being exerted on them.  I am glad to be rid of them and do not want to touch them except at work where I have no choice about using one.
Posted by Reese Matthews at 00:34

Comments, challenges and questions are welcome. Only a coward doesn't allow people to disagree with him.

Spam of any sort will be removed. That includes "cut and paste" crap, unacceptable links, or anything unrelated to the topic at hand.

Reese Matthews
Canadian, atheist, left hander, music fan, cyclist, and not necessarily in that order. I comfort the afflicted and afflict the comfortable.